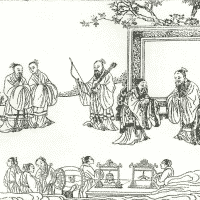 It is almost impossible to imagine that archery range was an integral part of Chinese academy compound, and supposedly a part of its Confucian education. It is true that in Confucius’ classical teaching, archery was a part of the so-called “six arts” that constituted the education of a gentleman, but that its becoming a part of school’s civil curriculum appeared quite late, only in the Song times. Before that, archery was taught only in military camps, and at most a part of civil rituals, taking place mainly for ceremonial purposes, such as “village libation ceremonies”.

Systematic and wholesale rethinking on the purpose and curriculum of education in the 11th to 13th centuries, during which both government and privately or family organized schools began to appear in large numbers, led to significant consequences: the debates on the relationship of schools and the imperial examination system that was also rising in importance; the rise and intensified activity of the so-called “private” academies resulted in a rethinking on how Confucian ideals could be implemented both within and without the public/government educational sphere.

This re-emergence of Confucian thinking resulted in the idea of “Confucian-military commanders”, in that civil officials were expected to involve themselves in military policing and even defensive activities, and that military officials should receive sufficient Confucian education to enable them to help realizing Confucian ideals of a stable and harmonious civil order. Several famous Song thinkers were singled out as quintessential “Confucian generals” – Han Qi, Fan Zhongyan, etc. It grew into a tradition in that many thinkers in later times were also praised of their military commandership. Actually, the conception was not new, but it became a widely embraced conception in the Song times, and it was at this time that “archery ranges” (shepu 射圃) first appeared notably in school compounds. The academies also gradually caught up.
Although there is no evidence that Song academies already had archery ranges, the practice had definitely begun to appear in various school compounds or government offices. Obviously, this reflected at least a preliminary or fledgling realization again of archery as education or rite.
By the Mongol Yuan times, the building of archery ranges had become widespread, and references to academies with archery ranges began to appear in the early Ming. By the mid-Ming times, the academies were almost uniformly equipped with them. Leading scholars such as Wang Yangming, Li Dongyang, Xue Yingqi, and others all wrote essays extolling their importance and even expounded on their educational values, advocating their construction.

Archery ranges continued to be built in academies, especially after the academies had become largely an integral part of government schools and a preparatory ground of the imperial examinations.

The rise of archery ranges in Chinese academy education contributed not in the growth of academies as a ground realizing the ideal of complete education, for the upbringing of l’uomo universal (Vittorino da Feltre). Instead it quite struggled to help cement a society of uniformity, orderly managed according to moral ideologies. Indeed, its perpetuation depended ironically on its function as a ground where members of government schools (of which many academies had evolved into) gathered for ritualistic performances and, perhaps even more often, to listen to imperial decrees and prescripts. The existence and continuation of the ranges thus reflected perfectly the Chinese penchant for “squares” – the Chinese peculiar equivalent of “public spaces”.