Sinologie Göttingen      CHINA GOES GLOBAL: Reflections on the Impact of a Rising Power

CHINA GOES GLOBAL: Reflections on the Impact of a Rising Power 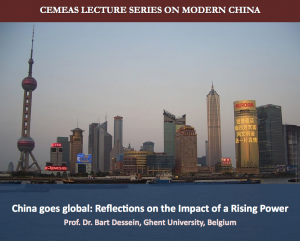 Although the days of yearly record-breaking double digit economic growth figures seem over, the economic growth China has, since the beginning of the Deng Xiaoping era, witnessed and is still witnessing, has increasingly interconnected the country with world markets, and has given it an increasing clout in global politics and governance. This rise has, however, also had important consequences for the country’s homeland affairs: economic developments have led to a rapid urbanization, an ecologic downgrade, and growing problems of social inequality. Along with the introduction of elements of a free market system and a greater religious freedom, the ideological monopoly of the ruling CCP has become questioned by an increasing number of citizens.

While, on the one hand, having to cope with the ecological, social, and political consequences of recent economic developments, the country’s political and economic power has also fed Chinese nationalist and patriotic feelings, and the country’s imperial past has gradually been revaluated by the Chinese political and intellectual elite and Chinese citizens alike.

Chinese policies not only affect the Chinese population, but also affect the world at large. In the minds of some political and economic leaders, e.g., the Washington consensus has made place for the so-called Beijing consensus. As such, this is symptomatic for the West’s necessity to redefine its position in the world order.

This opening lecture will set the overall theme of the series: the homeland consequences of China’s economic and political developments and the country’s ‘struggle for modernity,’ and the impact of China’s rise on global economics and politics.