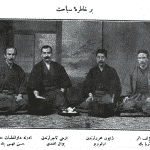 Kurzbeschreibung:
In studies on relations between Japan and Turkey, the topic of ‘religion’ has been mainly addressed in light of Islamic missionary activities and the role of Ottoman Turkish proselytizers in Japan. Recent studies have also highlighted the ways in which Japan served as a model for Ottomans in attaining „non-Western“ modernity. However, how Ottoman and republican Turkish intellectuals reflected about Japanese religions and spiritual practices has been not been studied yet in much detail, despite the fact that a great variety of texts attests to the deep interest for these topics. Writers from Turkey who engaged with various forms of Japanese spirituality relied in their analyses often on sources in Western languages.
The presentation will examine the originality of their interpretations and explore first-hand observations, such as a visit to a Buddhist temple in Tokyo, by Ottomans in early twentieth century Japan.