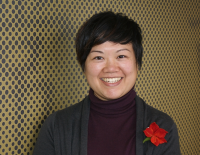 Dr. Liza Wing Man Kam pursued architectural trainings in design schools and practices in London, Paris, Liverpool, Hong Kong and Singapore before she joined the Bauhaus in Weimar, Germany in 2009 and obtained her doctorate in December 2013. Her doctoral research focused on depicting transformation of the political, societal and cultural symbolism represented by the Hong Kong colonial urban heritage in the city’s unique post-colonial settings in political and societal terms. Her work illustrates the inter-relationship between architecture, historiography, identity formation and hence civic awareness.

Kam’s post-doctoral research departs from her previous findings by illustrating the transformation of symbolism (political and cultural) represented by colonial heritage in a variety of post-colonial settings in Asian cities, from Shinto Shrines in Taiwan to cathedrals in Goa. Undertaking an interdisciplinary approach (architectural history and theory, historiography, urban sociology, political science, human geography and more), she is intrigued by employment of narratives represented by both urban fabrics as well as public space users in urban research, and how the notion works in parallel/ contrast to history.

Since January 2016, Kam is assistant professor at the Department of East Asian Studies at the University of Göttingen. From October 2020 to March 2021, she is awarded the ‘Stipendien für die Fertigstellung des “zweiten Buches” für Frauen’ from the Faculty of Humanities, University of Göttingen for finishing her second book on Taiwan Shinto shrines.